or, Why I still believe in Santa Claus but I'm not so sure about Daddy! 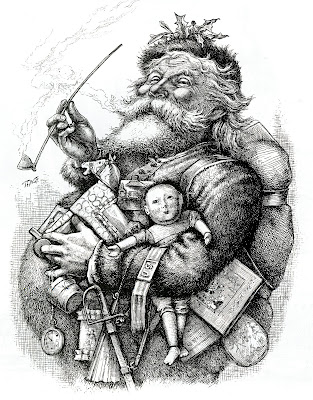 Two vignettes from my childhood:

Scene One - Me, aged about five, standing with my father at the corner of Middle and Pollock streets after having just seen Santa Claus go by in the Christmas parade.

Me: Daddy, if that was the real Santa Claus, then where are his reindeer and sleigh?

My father (without skipping a beat): Why, parked on top of the Elks Temple building.


Now up to this point, as far as I knew, my father had always been the fount of all wisdom and truth, so naturally I bought this whopper hook, line, and sinker.  There we were standing at the base of New Bern's five-story skyscraper, me craning my neck to see some sign of reindeer up above, when what to my wondering eyes should appear but a cast-bronze elk's head mounted on the corner of the fifth floor.  Now this elk's head indicated the location of the lodge rooms of the Elks, but to my five-year-old imagination it could only mean that a reindeer airstrip and hangar really did exist on the roof! Case closed!

Scene Two (a few years later) - Santa had brought me the electric train set of my dreams. I had played with it for days. Eventually it came time to put it away and clear the living room floor.  Dear Ol' Dad said to look in the hall closet where I would find the box which Santa had thoughtfully left behind for storage purposes.

Me: Why does this box say New Haven, Connecticut? Why doesn't it say The North Pole?

My father (after a longish pause): Well, Santa's so busy he sometimes has to use subcontractors.

But I still believe in Santa Claus!