Man with a Mission


F. Roy Johnson and the folklore of eastern North Carolina


by John B. Green III

Here in the Kellenberger Room we collect all manner of books on the history of North Carolina. We also collect books on North Carolina science and nature, art and architecture, law and politics, and of course, family history or genealogy.  We have also long recognized that an important category of books useful in understanding North Carolina and its people are those books concerning the folklore of the region.  Legends, tall tales, and ghost stories; weather wisdom and planting by the signs; folk cures, home remedies, and conjuring; all make up the traditional beliefs or folklore of the region, passed down from generation to generation and from one culture to another - Native American, African, and European.

Among the many books we have on North Carolina folklore are those published by F. Roy Johnson in Murfreesboro, North Carolina.  Johnson was the most prolific collector and publisher of eastern North Carolina's folklore in the 20th century. Our collection is fortunate to contain thirty-nine of the more than fifty titles which he issued between 1962 and 1986. 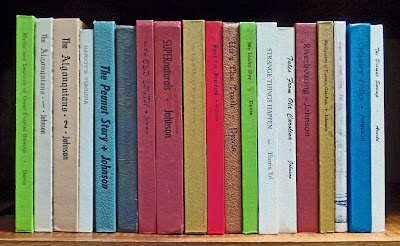 Frank Roy Johnson, newspaperman, folklorist, and publisher, was born in Bladen County, North Carolina in 1911.  A 1932 graduate of Duke University, he began his newspaper career in 1937 as the publisher of the Surry [Virginia] Herald.  He began publishing the Northeastern North Carolina News in 1938 while still living in Virginia, eventually moving  the newspaper to Murfreesboro in 1940 and in 1948 renaming the paper The Roanoke-Chowan News.  It was during these years that Johnson began to write and publish articles on the history and folklore of North Carolina.  He sold the Roanoke-Chowan News in 1962 in order to focus on his research and writing full time. Johnson established The Johnson Publishing Company and began to publish both his own writing as well as books of other historians and folklorists.

Books on folklore represent the largest category of works produced by the Johnson Publishing Company.  These include Johnson's own Legends, Myths and Folk Tales of the Roanoke-Chowan, How and Why Stories in Carolina Folklore, In the Old South with Brer Rabbit and His Neighbors, Supernaturals among Carolina Folk and Their Neighbors, and The Fabled Doctor Jim Jordan: a Story of Conjure. Works by other authors include Bernice Kelly Harris's Southern Home Remedies and Strange Things Happen, Hubert J. Davis's Myths and Legends of the Great Dismal Swamp and "Pon my Honor, Hit's the Truth: Tall Tales from the Mountains, and Louise R. Booker's Historical and Traditional 'Tar Heel' Stories from the Colorful Central Coastal Plain.


F. Roy Johnson tracked down what remained of Native American folklore in eastern North Carolina and produced two-volume works on the Algonquians and the Tuscarora: The Algonquians: Indians of that part of the New World First Visited by the English, Volume 1: Pre-history and Volume 2: History and Traditions and The Tuscaroras, Volume 1: Mythology, Medicine, Culture and Volume 2: History, Traditions, Culture.

Johnson also produced works which combined history with folklore. He brought out two volumes on the infamous Nat Turner slave revolt of 1831 and joined with E. Frank Stephenson, Jr. to write about brothers Richard and Henry Gatling's various inventions including Richard's famous Gatling Gun and Henry's attempt at building a flying machine.

He also reprinted a number of early publications relating to the exploration and natural history of the area including Thomas Hariot's A Briefe and True Report of the New Found Land of Virginia and Robert Arnold's The Dismal Swamp and Lake Drummond.

F. Roy Johnson's work in recording and publishing North Carolina's history and folklore was recognized by the North Carolina Folklore Society when it presented him its Brown-Hudson Award in 1976. Johnson continued to write and publish well into the 1980s. It is said that he handled all aspects of the production of his books from research, writing, and editing, to printing and binding.  He died in Murfreesboro in 1988 at the age of seventy-six.

Johnson's research notes and interviews are housed at the North Carolina State Archives in Raleigh. In 2014 a North Carolina Highway Historical Marker honoring Johnson was dedicated at the location of his former office and print shop in Murfreesboro.