Down by the River


An old photograph reveals a lost way of life


by John B. Green III

The collections of the Kellenberger Room include several albums of mounted photographs of New Bern and vicinity.  This photo, although unidentified, is from a small album containing other photos easily identified as New Bern.  The scene is of a creek or river landing with people engaged in what was once a familiar activity all over eastern North Carolina - hauling logs to water deep enough to float them downstream to waiting sawmills.  Trees were felled and cut in lengths by axes and two-man crosscut saws.  A two-wheeled vehicle known as a log cart was then rolled into place over a log. The log was attached to the underside of the cart by grapples or log-tongs and one end of the log was raised by a winch-like device, allowing it to be dragged or "skidded" along the ground.

The photo above features a log cart hitched to a brace of oxen.  The cart has two wheels approximately eight feet in diameter, with a lever-operated winch above the axle for lifting the log.   Once delivered to the landing, the log was rolled into the water and connected with other logs to form a raft.  Flattened iron spikes with rings called chain dogs were driven into the logs.  Chains were then passed through the rings to secure the logs to each other.  A tug or small river steamer then towed the completed raft downstream to the sawmill.

The importance of the timber and lumber industry to New Bern's economy during the second half of the 19th Century and well into the 20th Century is evidenced by the number of mill-related paper items found in the manuscript collections of the Kellenberger Room.  What follows is a selection of business and advertising items related to the dozens of lumber mills that once existed here. 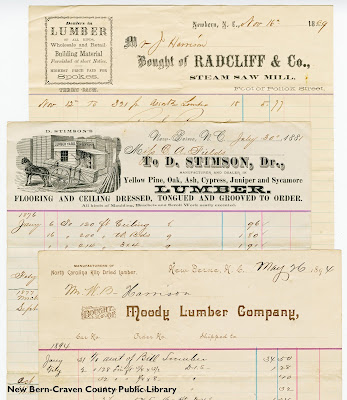