Three early governors of North Carolina lie buried along the Trent River in Craven County - Richard Dobbs Spaight, Sr., his son Richard Dobbs Spaight, Jr., and their near neighbor Abner Nash.  Nash (born c. 1740 - died 1786) served as the second governor of the newly formed state from 1780 to 1781. He was later elected to represent North Carolina at the Continental Congress in 1782, 1783, and 1785. It was while attending the Congress in New York City that Nash died on December 2, 1786 and was buried in St. Paul's churchyard. His body was eventually returned to North Carolina and interred in the family plot on Nash's Pembroke plantation. Nash's home was destroyed during the Civil War and his grave site suffered much neglect thereafter.  His sunken grave was visible, though very overgrown, and lacking any type of stone until the plot was cleared and marked by a low brick enclosure and a memorial tablet in the early 20th Century. 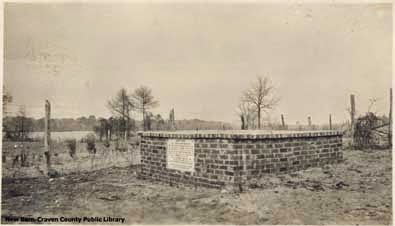 The Spaights, father and son, along with at least nine other family members were entombed in a stuccoed brick sepulcher on Clermont Plantation. The elder Spaight (born 1758 - died 1802) served as governor from 1792-1795 and as one of North Carolina's three signers of the United States Constitution in 1787. Spaight was mortally wounded on September 5, 1802 in a duel with fellow New Bernian and politician John Stanly. He died the next day and was buried at Clermont.

Richard Dobbs Spaight Jr. (born 1796 - died 1850) served as governor from 1835 to 1836. Failing to win reelection, Spaight retired from politics and devoted himself to his law practice. He was also very active as a Freemason, serving as Grand Master of North Carolina 1830-1831. Spaight died November 17, 1850 and was interred in the family tomb at Clermont.

The Spaight tomb fared little better than Abner Nash's grave. Vandalized during the Union occupation of New Bern, the tomb went through cycles of neglect and repair until 1934. In June of that year, Spaight descendant Col. Charles Shepard Bryan had the tomb demolished and replaced with a brick and granite walled enclosure 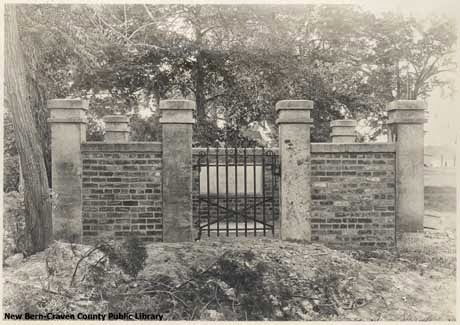 Today, the Spaight plot is owned by Tryon Palace Historic Sites and Gardens and is open to the public. The Nash grave remains on private property and is not accessible by the public.