A Different Sort of Library

Treasures from the Kellenberger Room

Featuring books, pamphlets, photographs, documents, and the occasional object from the collections of the New Bern-Craven County Public Library

The model of the public library of today, supported by government funding, and available to all members of the community, while not unknown in the 19th century, was rarely seen. The more common form of a library was a subscription library where the books and amenities of the institution were available only to those who owned stock in the library or paid an annual membership fee or both.  The Newbern Library Company was just such an institution.

Founded in response to an 1802 bequest of 100 pounds from New Bern teacher and merchant Thomas Thomlinson and incorporated by an act of the General Assembly in November 1803, the Newbern Library Company counted among its officers and stockholders many of the leading merchants, planters, and civic leaders of the town.  Initially successful at attracting subscribers and accumulating a large and valuable collection of books, the library was soon beset by two problems which would never quite be solved - the failure of members to pay for the stock they subscribed to or the periodic fees which the company officers were compelled to assess when funds fell short - and the failure of members to return the books they had borrowed.

Although the library would continue to function at least through 1836, it eventually succumbed to these two problems.  Its collection of books was moved to a room in the county courthouse where they still were on the morning of January 15, 1861 when the courthouse burned.  Fortunately, those who saved the county records from the fire also thought enough of the Library Company's books to rescue them as well.  They were described at that time as ". . .The Newbern Library, embracing a large number of historical works, many of which are not re-printed and hence more valuable."  Fourteen months later New Bern would fall to the Union army and the collection would never be mentioned again. 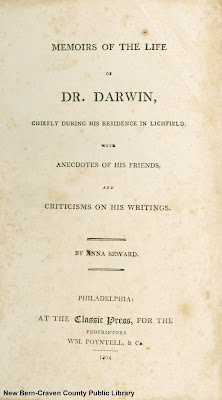 Anna Seward, Memoirs of the Life of Dr. Darwin,
Philadelphia, 1804

Which brings us to today's treasure from the Kellenberger Room.  It is a book, Anna Seward, Memoirs of the Life of Dr. Darwin, chiefly during his residence in Lichfield, with anecdotes of his friends, and criticisms on his writings, Philadelphia: at the Classic Press, for Wm. Poyntell, & Co., 1804, bound in full calf and bearing the bookplate of the Newbern Library Company.  The writings of Erasmus Darwin (1731-1802), English physician and naturalist and grandfather of Charles Darwin, were known on both sides of the Atlantic and would have been an appropriate acquisition for the Newbern Library Company.  Whether it was borrowed and never returned by a stockholder of the company or was purloined by some Union Army lover of literature will never be known.   What is known is that a sharp-eyed denizen of the Kellenberger Room spotted it on a certain online auction site and secured its return to New Bern.