Over the coming months, we will make occasional Saturday posts our "Source Saturday" and describe some sources that may be overlooked by researchers, historical or genealogical.

Today we will concentrate on Apprentice Bonds.

The earliest apprentice law on record in North Carolina is 1715 and it remained pretty much untouched until the early 1900s. See Colonial and State Records of North Carolina, volume 23, page 70-71 for Chapter XLIX. An Act Concerning Orphans.

Its purpose was to provide a method of equipping orphaned and/or poor children with skills to become a productive adult and not to become a burden to the county coffers. Males and black females were usually bound until they were 21 years of age; white females until 18 or married.

Besides teaching an occupation, the master provided food, clothing, lodging, and usually a rudimentary education to the apprentice. As time wore on, this last provision was denied to free black apprentices. Upon completion of the apprenticeship, the master was to provide a new suit of clothes, a new Bible, and some money.

When using apprentice bonds, be sure to read the entire bond. Since the child was apprenticed to a certain age, often the current age and sometimes the actual birth date is written on the bond, as in the example below. 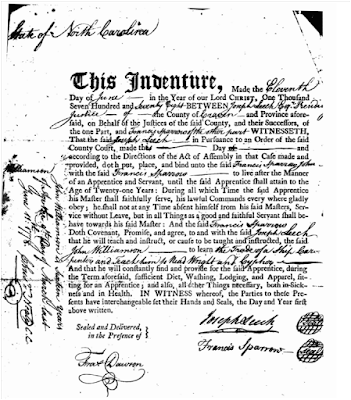 The apprentice did not necessarily have to be an orphan, as a parent could consent to having a child apprenticed to learn a trade.

The procedure for apprenticeship was as follows:


While reading the actual court minutes, you may find an indication of apprenticeship, as in this 1817 court minutes record.

You should seek to find the original bonds and records concerning apprenticeships, though, as more information may be available there, as indicated in this record concerning the same individual.

The Kellenberger Room staff have abstracted many of the Craven County Apprentice Bonds that are located on microfilm from the North Carolina State Archives. Again, additional information may be located in the originals, but most genealogical information has been abstracted.