"The day was a perfect one" - the launch of the Charles G. Blades

Treasures from the Kellenberger Room

Featuring books, pamphlets, photographs, documents, and the occasional object from the collections of the New Bern-Craven County Public Library 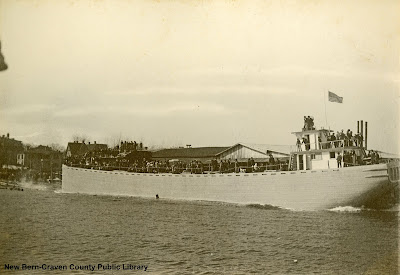 New Bern's maritime history is long and extensive.  Anytime we can acquire a photograph or document illustrating some portion of this history we tend to jump at the chance.  Two years ago we secured a photograph album of views of New Bern taken by an unknown photographer about 1901.  Two of photos in the album are believed to show the launching of the lumber barge Charles G. Blades, an event which drew hundreds of people to the Neuse River waterfront on January 16, 1901.  A detailed account of the launching of what was said to be the largest vessel ever built in the state appeared in the New Bern Daily Journal the following day.

The Blades was constructed for the Blades Lumber Company at its mill located between Johnson and King streets, just north of the Neuse River bridge.  Named for company vice-president Charles G. Blades, the vessel measured 175 feet long with a beam of 28 feet 8 inches, depth of hold of 12 feet 6 inches, draft of three feet, and was capable of carrying 500,000 board-feet of lumber.  On the day of the launching scores of people clambered aboard for the brief trip down the ways and hundreds more crowded the nearby bridge and adjacent shore and wharves.  Ivy Blades, daughter of W.B. Blades, company president, broke a bottle of water across the bow while christening the vessel the Charles G. Blades.  The lumber barge began its slide into the river to the cheers of the crowd and a salute from the U.S. Revenue Cutter Boutwell.  The momentum of the launch carried the Blades nearly half way across the river before the ship was taken in tow by a tug and returned to the dock.