Mermaids in New Bern!  or the day the Manatees came to town. 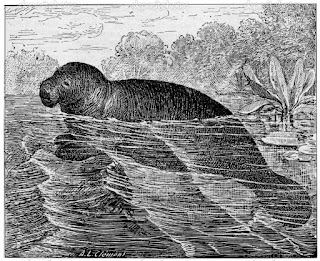 A Curiosity in Port.
Yesterday afternoon the schooner yacht Manatee arrived in port from Washington, D.C., in charge of Mr. J.W. Zellers, who has aboard two wonderful and rare curiosities known as the Manatee, or Sea Cow.  They weigh upwards of seven hundred pounds apiece and inhabit both land and water.  In appearance the head is like that of a cow and the body is similar to the whale.  They were taken off the Florida coast and belong to that order of animals that is fast becoming extinct.  The scientific name of this odd creature, which will be on exhibition here a few days, is Trichechus Latirostris. That's right, pronunciation and all.

The next day the Journal announced that the sea cows would be available for viewing at the foot of Craven Street through October 28th, "Admission 10 cents."  Their keeper and exhibitor, Capt. John W. Zellers, also known as Manatee Zellers, was renowned along the East Coast for his skill in capturing and keeping alive these warm-water marine mammals.  Zeller, a resident of Titusville, Florida, made a living by hauling freight, guiding sport fishermen, and capturing and exhibiting manatees.  He is said to have exhibited a live manatee at the Centennial Exhibition at Philadelphia in 1876 and to have supplied several manatees to P.T. Barnum for his circus and menagerie.

The manatees displayed in New Bern were Florida Manatees (Trichechus manatus latirostris), a subspecies of the West Indian Manatee.  There are three living species of manatee - the West Indian, the Amazonian, and the West African.  Together with the similar dugong of Asia, they comprise the order Sirenia whose name hints at the folklore linking the manatees and dugongs to the mythological mermaids and sirens.  Although Captain Zellers' manatees arrived in New Bern by schooner in 1890, Florida manatees regularly wander as far north as North Carolina and beyond during the warm-water months of summer and early autumn.  They have occasionally been spotted in the Neuse River as far inland as New Bern.

What did 1890s New Bernians think of these unusual visitors?  The Daily Journal reported that the manatees were "attracting the attention of the citizens of New Berne and exciting wonder and admiration on account of their being such strange creatures, and of their intelligence and very gentle nature."  Zellers and his manatees left New Bern sometime after October 28th and, with exhibition stops along the way, proceeded south to the manatees' home in the warm waters of Florida.