"a full blaze of illumination"


or, New Bern throws a party

Any item which documents how New Bernians publicly celebrated holidays, elections, and other community-wide observances is always of interest.  It is exciting, therefore, to discover a letter written from New Bern in 1824 which describes a major town celebration in honor of the return of the Marquis de LaFayette to the United States.  The letter records the use of candles in windows, bonfires, cannon volleys, music, and processions through the streets - a lively time indeed.

LaFayette, one-time aide to George Washington and one of the last survivors of the Revolutionary War officer corps, had arrived in New York on August 15, 1824 for a nostalgic tour of the United States.  Although he would not reach North Carolina until February 1825 (and would never come to New Bern!) the town decided to have a grand celebration upon receiving news of his arrival in the country.

The author of the letter was Edward Graham (c.1764-1833) a prominent New Bern attorney and court official who had constructed a large and imposing residence on Broad Street c. 1817-1818.  A contemporary described Graham as holding a "prominent rank at the bar" and maintaining "a very fashionable style of living."  Graham wrote the letter to his daughter Betty (Elizabeth) who later married John P. Daves.  The location of the original letter is unknown.  Fortunately, it was published in the New Bern Daily Journal on August 24, 1890.  This is the source for the text reprinted below.

Dear daughter: - We had a meeting of the Corporation of the City, and an Assembly of our citizens this morning, to consult as to what was proper to be done by way of manifesting our joy and giving token of gratitude and welcome for the arrival of the illustrious La Fayette once more to our shores; and loud and merry peals.  Every house in our city is in a full blaze of illumination, our artillery vomiting forth their thundering volcanoes and bonfires of tar barrels in every street.  The windows of many of the houses display beautiful transparencies, with emblematic devices, historical illusions, and appropriate poetical effusions, while our streets are alive with "black spirits and white," all ages, sexes and ranks moving in succession in all quarters of the city, with various bands of musick, our whole orchestra, playing through the streets our best national and patriotic airs.  You need not be told that I would not let such an opportunity escape me of making a display, the occasion called me out.  I was determined to let all know that, deserted and sad as was the mansion's daily appearance, now that you are absent, there was still a master spirit there; so I displayed a candle in every individual pane of glass in the house, even my front door "fan lights" showed 3 brilliant coloured lights in festoon.  "Vat you tink of she?"  Meantime I mounted my horse and rode through our streets, and, as might very naturally have been expected, at the explosion of every great gun, I was within an ace of exchanging my seat in the saddle for a plunge in the mud, - you know Lengthy is sometimes a willful beast, and will have his way.  No Madam! you are altogether mistaken in your rebukes.  I did not go and leave the house at the mercy of 200 burning candles distributed in every part of it, for I stationed one of your faithful Janizaries in every room to watch and trim the lights, and not to depart therefrom, on pain of death, until I should return;  and I had every reason to believe that each one of them executed his or her appointment with fidelity no less honourable to themselves, than it was satisfactory to me.

The lights now are fast disappearing.  Mrs. Simpson doused her's first in the neighborhood, and my light extinguishers are doing their best while I write, to "leave the world to darkness and to me," with General Serena at the head of them.  Dismiss your uneasiness, my over anxious Madam!  By tomorrow's dawn your whole force shall again appear on parade armed with soap, lye and sand, and wash away every stain or scorch that grease or flame could leave.

Good night Betty!  Would that with the benediction I could have the accustomed parting kiss from you.  And then Jane, and that indefatigable traveller, my good old - , Confound the kettle drums, fifes, flutes, fiddles, clarionettes, horns and huzzas, I can't get on for them!  Tell Jane that I am sensible I am in her debt for her last letter, she will excuse me for reading it to Mr. Attmore, when you tell her the handsome compliment he paid it: "If anything could reconcile one to the loss of Miss Jane's company, it would be such letters."  Could Chesterfield have done better? 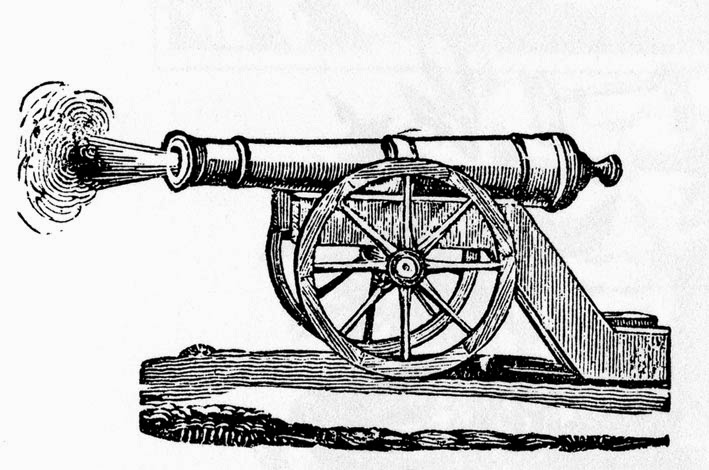