Most towns of New Bern's age manage to accumulate the spare cannon or two.  Relics of bygone conflicts, they are re-purposed as monuments and ornaments in parks and cemeteries.  New Bern has four cannons on public view, each with an interesting history of use and abuse.

The longest on public display is the so-called "Lady Blessington" cannon and its now relocated companion.  Dating from the 18th century, they are said to have been captured from the British during the American Revolution.  The cannon closest to the Episcopal churchyard fence has been known as the "Lady Blessington" since at least the 1880s.  It was declared to be such by both of New Bern's 19th century historians, Col. John D. Whitford and Rev. Lachlan C. Vass, who agreed that it had been captured by one of New Bern merchant John Wright Stanly's privateers.  Both indicate that the cannon, with others, was from an armed British vessel financed or sponsored by a Lady Blessington.  A 1901 newspaper article even states that the name "Lady Blessington" was once visible on the breech of the gun but had been worn away.  Unfortunately, the British vessel has never been identified and no Lady Blessington is known from the Revolutionary war era.

A second legend attached to the "Lady Blessington" cannon concerns its odd placement - muzzle buried in the ground.  Col. John D. Whitford is again the authority.  Writing in 1904 he states that when the surveyor Jonathan Price was hired in 1810 to produce a new survey of the town "the cannon was carried and then set up, where it is now, as a starting point for Price in his survey."  The minutes of the town commissioners do record Price being hired on April 26, 1809 "to run off and survey the Town  of New Bern and to establish such corners of squares, as near the original plan of the said Town as possible."  One year later the commissioners ordered that Price "be paid the sum of Two hundred & fifty dollars for his services in Surveying the Town - fixing the Corner stones, making two plans of the town, with notes etc."  Alas, no mention is made of Price being ordered to bury a cannon up to its trunnions for use as a benchmark.

The cannon's 20th century history is marked by only two events of note.  When the Episcopalians erected the present wrought and cast iron fence around their churchyard in 1902, the "Lady Blessington" cannon was revered enough, and enough of an immovable object, that the fence was caused to curve around the gun.  And in May 1928 the Richard Dobbs Spaight Chapter of the Daughters of the American Revolution embedded a small bronze tablet in the sidewalk in front of the cannon which recounted the traditional history of the gun.

From the 1890s onward, and possibly much earlier, the "Lady Blessington" cannon had a companion in the form of a smaller gun located approximately ten feet closer to the street and likewise buried muzzle down.  It can be seen in the circa 1900 photograph and enlarged detail below. 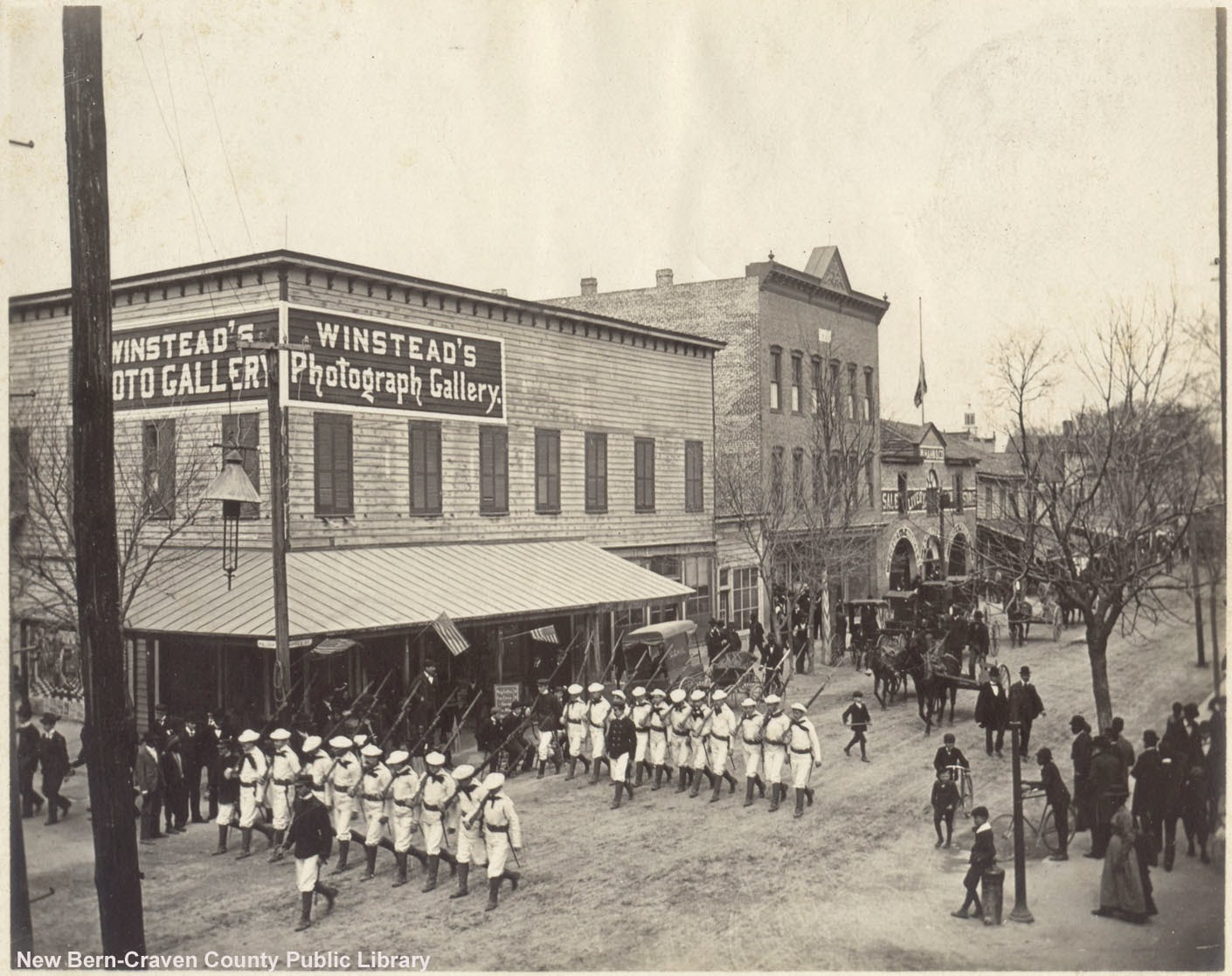 It may have been part of Jonathan Price's survey of the town although only one cannon is mentioned by later historians.  While this cannon's history prior to the 20th century is hazy at best, its later history is better known.  In June 1916 the cannon was temporarily removed so that a hole could be bored through the side of the tube and another hole drilled through the cascabel to accommodate a city water pipe.  It was then replanted, muzzle down, in the sidewalk, and a small bowl and faucet was attached to convert the gun into a drinking fountain.  By the 1960s the cannon had been removed from the street and reappeared, minus its plumbing, on a concrete base at Union Point park.  After suffering vandalism and an attempted theft, the gun disappeared into city storage.  It was rediscovered in 1988 and loaned to the New Bern Academy Museum where it was restored and placed on display in July 1991.

The early history of New Bern's third cannon is likewise unknown although it history from Tuesday February 18, 1930 onward is well documented by the local newspapers.  On that date, workmen excavating the foundation trenches for the new McLellan store at the southwest corner of Middle and Pollock streets, struck the buried cannon.  It was at a depth of eighteen inches beneath the surface and was grown over with trees and brush.  As news of the find spread, Mrs. Richard Nixon Duffy, president of the New Bern Historical Society, requested that the cannon be given to her organization for display.  Mr. H.W. Hendricks, superintendent for the Goode Construction Company, whose workmen had discovered the gun, readily agreed to her request.  Mayor H.G. Tolson dispatched a city truck to remove the cannon and the historical society began to lay plans for the gun's display.  Mrs. Duffy initially proposed that the cannon be mounted on the Craven County Courthouse green but this plan eventually fell through.  It was not until June 1933 that the cannon found a permanent home.

A site along the newly landscaped East Front Street waterfront had been agreed upon and the cannon was to be mounted on an architect-designed base.  The architect was Adolph Witschard of New York City, who was residing in New Bern.  Mr. Witschard designed a base of local shell rock ornamented with cannon balls and draped with anchor chains.  The base was soon completed and the cannon duly mounted.

Since its discovery three years earlier, the cannon had acquired a remarkable history.  After much speculation, it had been decided that the ancient gun was probably one of the six cannons removed from Tryon Palace by the New Bern Committee of Safety in June 1775.  Speculation became "fact" with the erection of a decorative marker adjacent to the cannon which proclaimed that it was a "Tryon Palace Cannon."

The historical marker is long gone and the shell rock and anchor chain base for the cannon was destroyed during the refurbishing of the East Front Street park 1999-2000.  The old cannon is still to be seen there although now mounted on a plain granite base.

The fourth and last cannon on our tour has a history as murky as all the rest.  Found somewhere in New Bern in the 1950s, it came into possession of the City of New Bern who donated it to the Tryon Palace Commission.  Mounted on a reproduction naval gun carriage, designed with assistance from the Smithsonian Institution, the cannon was placed on a brick platform on the south lawn of the Palace.  There it was dedicated on September 17, 1961 and fired by a U.S. Marine Corps gun crew.