How Firm a Foundation

Many prominent buildings have cornerstones - decorative and inscribed stones giving the name of the building or organization erecting the building, the date, and other pertinent information.  Many are hollow in order to receive and preserve a container of mementos for posterity.  And, almost always, a public ceremony is held to properly lay the cornerstone.

These buildings include courthouses and city halls, schools, churches, and the quarters of fraternal organizations.  A quick survey of New Bern's downtown historic district reveals ten cornerstones dating from 1801 to 1948.  Of these ten stones, eight are placed at or near the northeast corner of the building.  This raises an interesting point.  Why are the majority of cornerstones in New Bern and many other places laid in the northeast corner?  For the probable answer we need to examine the history of a group long associated with the ceremonial laying of cornerstones - the Freemasons. [cue ominous music!]

While the earliest known Masonic cornerstone laying in New Bern was for St. John's Lodge No. 3's new building begun in 1801, the next earliest known is for First Presbyterian Church.  The Newbern Sentinel for June 12, 1819 reported on the "interesting ceremony of laying the foundation CORNER-STONE of the first Presbyterian Meeting-House in Newbern."  Following  religious services by the Rev. J. Nicholson Campbell, "the corner-stone was then deposited by the master masons present." 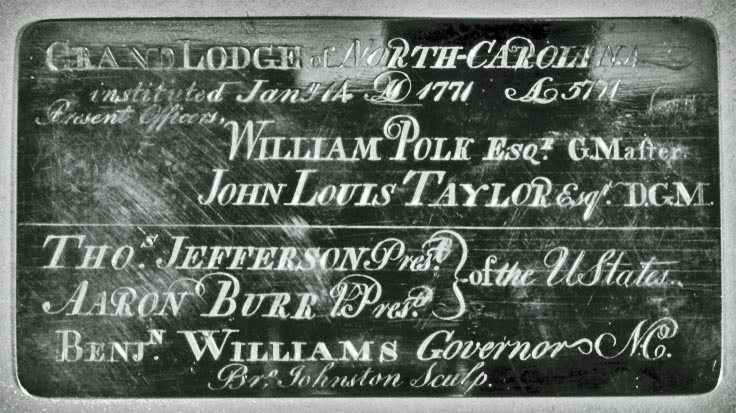 While the original cornerstone for the Presbyterian church was laid in the southeast corner (and is no longer visible) the following New Bern buildings have or had their cornerstones at their northeast corners: St. John's Lodge No. 3 (1801), Craven County Courthouse (1883), Second Newbern Academy (1884), Centenary Methodist Church (1904), New Bern Elk's Temple (1908), St. Cyprian's Episcopal Church (1910), U.S. Courthouse and Post Office (1933), and the New Bern Scottish Rite Temple (1948).  Of these cornerstones, five are known to have been laid by Freemasons: St. John's Lodge, Craven County Courthouse, Second Newbern Academy, St. Cyprian's Episcopal Church, and the New Bern Scottish Rite Temple.  Thus, by the early 20th century the northeast corner seems to have been firmly established in New Bern as the proper location for a cornerstone and on many occasions the Freemasons were called upon to conduct the cornerstone laying ceremonies.

We'll close with an excerpt from the New Bern Daily Journal for June 18, 1884 detailing the laying of the cornerstone of the Second Newbern Academy building.